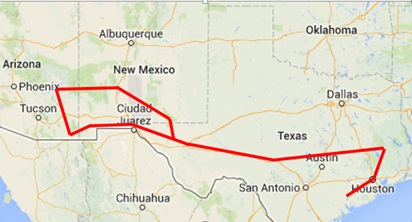 I joined an “Initial Attack” crew from Texas for a wildfire detail to Arizona from 1-14 July.  Representing the crew were personnel from the U.S. Fish & Wildlife Service, U.S. Forest Service and the Texas Forest Service.  As the designation implies this crew is called up to slow the spread of a wild fire until larger resources can arrive to contain it, if needed.  If there is no fire the crew is used at the discretion of the unit where it is stationed.  This can be anything from patrolling for fires to grounds maintenance.  Our temporary station was the Coronado National Forest in Douglas, AZ.  The first non-fire project was digging holes for poles to support a coral for horses and pack mules.  As the days past we resigned ourselves to project work for the duration of the detail.  Then the call came for a fire in Kearney, AZ – 3 hours to the north.  The fire had spread to 500 acres through river bottom forest of the Gila River.  The crew of 20 was split in two with my squad relegated to mopping up hot spots after the fire had burned out.  The other crew worked with aerial water bucket drops in areas where the fire flared up as day time temperature heated up.  Win some, lose some nevertheless mopping up in temperature of 107 degrees (118 degrees heat index) with a 50 pound pack and an additional 20 pounds of protective clothing and equipment was taxing.  The fire was contained after the first day with two additional days of mop up.  On the first day it was either the heat or elevation that made me wonder if I was getting too old for this work but after three days I working without any problem.  It usually takes three days to acclimate to my environment.

Monsoon rains decrease the threat of fire in the region and cut short our detail. 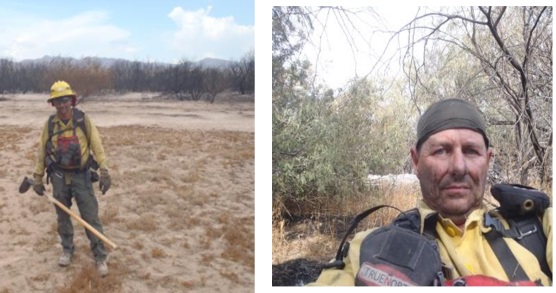 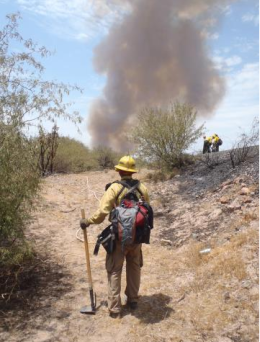