Having parked the POV at my sister’s house in San Antonio I met my coworker, Boyd for this wildfire severity assignment.  The drive to Caspar, WY in our FWS truck consumed 27 hours with a night over in Amarillo.  Boyd is refuge manager for the South Texas Complex.  This assignment is a rarity for that position unless fire severity reaches Level 5 nationwide.  By then all qualified personnel are required to assist where needed.  To refuse is to be blacklisted from further assignments beyond his/hers duty station.

Upon arrival in Caspar we reported to the Bureau of Land Management (BLM) office.  It is an agency of the Department of the Interior as is my Fish and Wildlife Service. Its fire program consisted of 8 personnel, ranging from seasonal fire techs to engine captains to a Fire Management Officer.  Their area of operation is 6 counties from northeast to eastern Wyoming, covering hundreds of square miles.  The work routine was standing by until a fire was reported, possibly requiring 3 hours of driving.  Our first call was in the foothills of Alcova Lake resort.  Only a 10 minute hike with full gear and implement but still winding me. This was not unexpected.  In the past my mountain legs and lungs would come on line in 3-4 days.  That was the past.  I was unsure I would adapt as quickly at age 57. The fire tuned out to be a 10 x 10 foot lightning strike.  Unbeknownst to me this and 1-5 acre burns may be the norm for the duration.

The following day brought continuous light rain, effectively reducing the chance of fire to zero percent.  When this occurs, the fire crew resumes other project work without worrying about extending too far from a reported fire.  Today’s project was in the mountains near Kycee, about an hour drive.  Our destination was a mountain meadow invaded by Ponderosa pine (Pinus ponderosa).  There was unrest in the forest, there was trouble with the trees for the grasses want more sunlight and the pines ignore their pleas.  But the pines can’t help their feelings if they like the way they’re made and they wonder why the grasses can’t be happy in their shade?  Teams were broken up into one sawyer (chainsaw operator) and two swampers.  Swampers move branches and other debris away from the sawyer as he cuts.  Additionally we swampers piled the branches ten feet high.  Dozens of these piles occurred over the summer.  Come the first heavy snow the crew returns to burn the piles.  Now there’s no more pine oppression and the plants are all kept equal by hatchet, axe and saw. 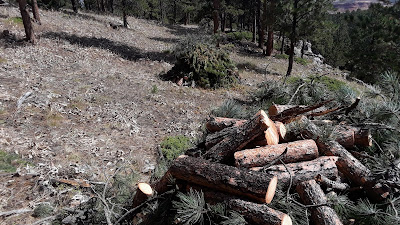 The next day produced 3 small, local fires from .5 - 2 acres.  My two week mission is designated as a severity operation.  Over the years I’ve been in the shit, moped up after burned forests and on occasion worked severity details.  When a dispatcher request help we assist the county fire department but only if it’s a wildfire, not a burning structure or vehicle.  Thus far our crew never arrives on scene before the county FD.  The county has departments distributed throughout therefore, they have the advantage of any one fire truck arriving on scene before us.  What’s left for us is mopping up – putting out smoldering vegetation and/or cow pies.  We use two Type 6 engines (diesel F-350 trucks with a 300 gallon pump plus an incident command truck where the IC leader sizes up the fire and directs the operation.  Severity operations are a big deal here, stopping fires before they increase in size and create more damage.  The BLM crew regaled us with stories of fires that ran for hundreds – thousands of acres, consuming houses and other structures in their path. 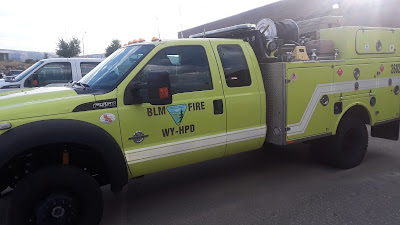 For two days this week we didn’t have a fire despite potential conditions for such – high wind gusts of 50+ and low humidity. These 12-hour shifts mimic fire departments – hours of boredom punctuated by an hour or two of excitement.  When conversing with the crew my progressive philosophy is tempered by the ideology of the region.  This is a state which elected Trump by the highest percentage in the country. The present ideology is as ossified as its dinosaur fossils. President Obama is considered the evil mastermind of coal’s decline despite the fact that it can’t compete with the economics of cheaper natural gas, wind and solar power.  I hold my tongue, walkin’ around and I see/All the bullshit around me/Try and keep my mind on what’s going down/Can’t help but see the elephants around me.  I’ve yet to see a billboard or sign with a Democratic politician.  Liz Cheney, the eldest daughter of the Dark Lord himself (America’s 43rd president) is running for a second term.  For amusement I read her website rants, noting what she calls the war on the west. What does that mean? There was a war here once. That ended in genocide of indigenous people. 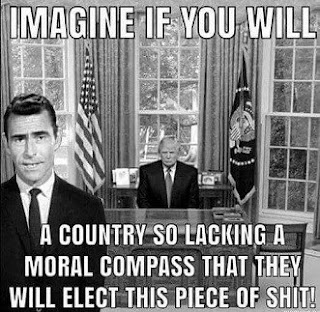 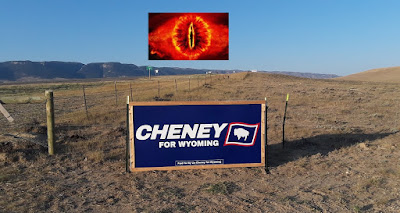 Yesterday was two fires but at the first one we didn’t leave the engine because it was completely out.  That was caused by gunfire at a shooting range.  The second, on state land was also gun fire related.  Only 5 acres and another mop but at least we arrived while there were still flames.  Boyd calls this Turd Patrol because that’s all that’s left smoldering.  It's amazing how much I forget about the pain when I'm in beast attack mode on a fire. After an hour of extinguishing turds I have time to botanize, finding partially burned mountain bee plant and chard clumps of crested wheatgrass, an introduced species from Russia.  Nothing else though. All other grasses were obliterated by overgrazing. What have they done to the Earth? What have they done to our fair sister? Ravaged and plundered and ripped her and bit her. Tied her with fences and dragged her down. 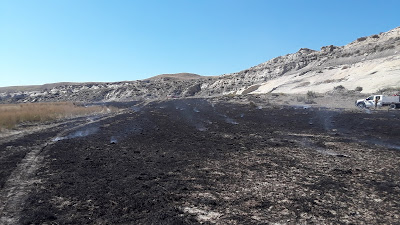 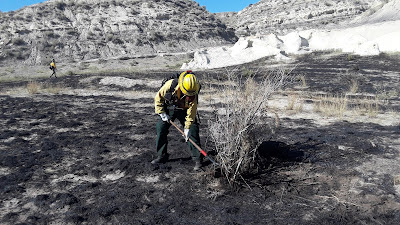 Tomorrow I’ll wake up at the hotel and start dressing in layers. The Leukotape on my arches is to offset hotspots as a consequence of several days of PT with fire boots and a 45 pound vest.  Next, a section of nylon panty hose over both knees prevents the bite of knee braces.  The left knee will be replaced in January, joining my artificial wrist.  The right knee is braced up from straining too much to compensate for the left. Nomex (fire resistant fiber) trousers’ are followed by liner socks, hiking socks and fire boots.  I wear a t-shirt until I need the yellow Nomex shirt.  Having donned my clothing and braces I count out the medication to get through the day.  If the grinding of knee bones or fibromialgia flare up becomes intolerable I opt for Tylenol and Codeine.  Black market Vicodin for mountain hiking.  Dark web Prednisone increases VO2 max.  Today it’s was a 1000mg ibuprofen day.  Aw, comfortably numb!

After 5 days of boots and vest PT and fires I start adapting to the physical routine and relish the increased expansion of air in my lungs and strength in my legs.  I’ll lose it all within a week on the gulf coast flat lands.  One week to go. 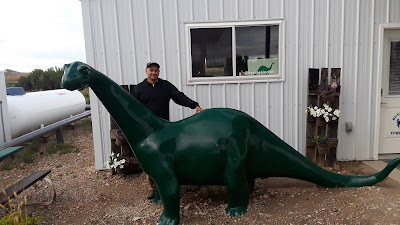