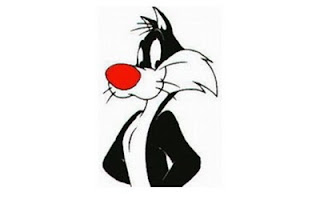 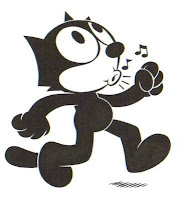 It was Saturday morning. I'm lying in bed garnering enthusiasm to exercise when Motorhead joins me to peer outside the window at a grackle in the front yard. I see the intent in his eyes, a prisoner of his genetic desire to stalk this avian prey. Then it dawned on me, Felis sylvestris, the former Latin scientific name of the house cat, now replaced with Felis catus. Felis? Felix the Cat? Sylvestris? Sylvester the Cat? Sure enough, a little research proved my assumption. The naming of Felix the Cat originated from its creator Otto Messmer. Felix from Felis. In this same vein the legendary Friz Freleng named Sylvester the Cat from Felis sylvestris.

We watch the birds a few minutes more. Motorhead (Felis catus subspecies motorus) walks outside to roll in the dirt and I start the day's exercises.
Posted by Rogue Botanist at 17:45 1 comment: 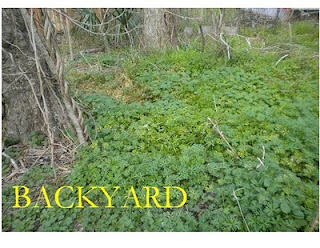 In previous years my harbinger of spring was the blooming of lyre-leaf sage (Salvia lyrata) but that interpretation has changed. With the passing of the great freezes of 2011 my candidates for spring's entry into this year is the flowering of Spring Beauty (Claytonia virginica). Of the past 11 years in this dung pile town I have experience only two frost kills after I started my spring/summer garden on the 3rd weekend of February. Next two weeks' sowing: snap beans, summer squash, cucumbers, carrots and come April tomatoes and potatoes.

This is time when the front door stays open for Motorhead to come and go as he please although he nags me to lead him outside now. Mosquitos are around the corner but for now all that enters the house are crane flies. In the past catching and eating these insects was a treat for Motor and Doobie. Motor spends more of his time outside now. In the day he sleeps which gives me solace that more songbirds will be spared. Not that he was adept at catching them anyway. Looking around the yard one week after torching the non-native plants I see the survivors and they appear just as numerous as before however a number of natives are flowering; all forbs except for the eastern redbud (Cercis canadensis) which flowers before its leaves appear. Not far behind will be Red Buckeye (Aesculus pavia) with leaves that emerge in January and suffered no ill effects from the hard freeze. Spiderwort and violet oxalis flowers died back but reappeared again within two weeks. I'm dismayed at the proliferation of bedstraw throughout the yard but over the years dwindling in number after relentless weeding and torching. 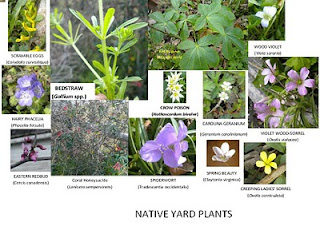 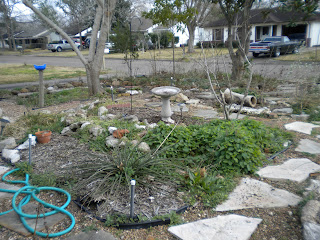 Posted by Rogue Botanist at 22:53 No comments:

A Broccoli By Any Other Name 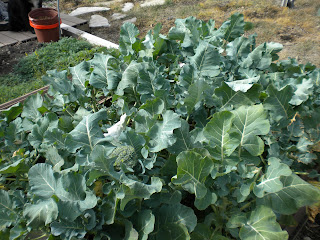 I had success this winter with lettuce, greens and Broccoli despite the repeated hard freezes. Broccoli took frost burn on the leaves but rebounded this week with temperatures in the 70's. My spinach didn't pan out; producing only 5-6 plants that are now over ran with Scramble Eggs (Corydalis curvisiliqua). As I surveyed the plant I spotted my first floral head and like many more to follow became dinner tonight. Broccoli (Brassica oleracea) is in the mustard family – BRASSICACEA. Nearly all mustards that grow wild in Texas are cool season plants. On occasion I'll come across a species of Lepiduim in August. In higher altitudes mustard species are common in the summer. In my transient days in the forests of New Mexico I regularly plucked water cress (Nasturtium officinale) from the rivers to augment my beans and ramen noodle dinners. Broccoli is one of several cultivars of B. oleracea, a native of Europe. Over the centuries the species has been grown to enhance a specific part of its body and this cultivar was given another name. 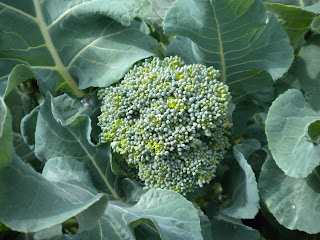 Posted by Rogue Botanist at 17:20 No comments: 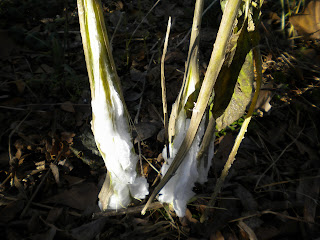 Frost Weed (Verbesina virginica) is a flower in the Sunflower Family. It ranges from Texas to Florida and north as far as Pennsylvania. At times of subfreezing temperatures the sap will freeze and expand and the resulting pressure splits the main stem open. I've seen this before in the bottomlands but never took a photograph of this event. Following the recent cold snap that paralyzed a large portion of the country I walked in my back yard to find frozen sap on my dormant frost weeds. Frost Weed can grow to 6 feet.  With its 50 - 100 or more blossoms Frost Weed  is a good plant for bees but is a prolific seeder and can get weedy. 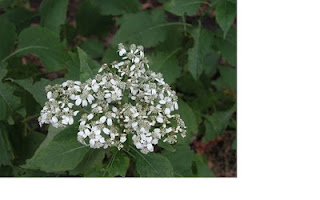 Said it better than I ever could

On the 100th anniversary of Ronald Reagan's birth the conservatives and even NPR are perpetuating his myth.  NPR is kowtowing to the republicans in the House of Representatives because they're scared of losing funding.  I expected NPR to have more stones.  Oh well.


Reagan in One Word

By CHRISTOPHER FONS
Ronald Reagan was a rat from the beginning. He was a bad actor, snitched for the House Un-American Activities Committee, he shilled for General Electric, and then represented the reactionary forces in the 60's that saw an opening to role back the New Deal and the Great Society as well as the gains of the individualist movements (free speech, civil rights, black power, gay rights, feminism, etc..) of the latter part of the 20th century. He did this by appealing to the American people's worst values; mysticism, selfishness, racism, and extreme nationalism. His was a slick George Wallace, a right wing populist sans the OVERT racism. But we all knew what he was talking about when he talked about "welfare queens," crime and lawlessness. He and Mike Deaver understood that the white ethnics and southerners who were the backbone of the New Deal/Democratic coalition could be split off from blacks and Jews and their labor allies by talking about social issues and taxes. It worked, particularly in the areas of the country where the industrial economy was in decline. Thus the creation of the Reagan Democrat. In the south the process was already underway when the Democratic Party embraced civil rights.
Internationally he allied himself with the most right wing reactionary killers in the world. In Southern Africa they allied with apartheid supporters, supported the prolonged imprisonment of Nelson Mandela, and funded the UNITA killers in Angola. In Mozambique the RENAMO forces that Reagan funded at the time were known to be the most vicious killers in the world. Funded by the US and South Africa their main goal was to terrorize the entire Mozambique population because they had chosen independence and a left wing government.

In Central America and the Caribbean the late 1970's were a time of hope and struggle for human rights and liberation. The Reagan clan said that at all costs, hundreds of thousands of lives and devastated societies, the movement against dictatorship would be crushed. They won. Guatemala, Nicaragua, El Salvador, Grenada, and the region as a whole have returned to their traditional subservient role in the world economy with the requisite dismal life expectancies, infant mortality, and lack of economic opportunity. In Afghanistan the Carter and Reagan administrations helped create 9/11. They sought out the most reactionary Islamic forces to fight the Afghan government and the Soviets including Osama bin Laden. Their thuggish medieval allies would eventually prevail which gave hope to some of the most reactionary people on the planet. Which is the main reason for Al Queda's success. Billions were given in aid in the name of anti-communism, Reagan's clarion call.

Anything in the name of anti-communism.
The big lie is that he hated "big" government. This was and is a propaganda tool the right wing populists use. They actually use government to discipline the population and redistribute wealth upward. You need a strong state to do this. He increased the size and scope of government not the opposite. Reagan was an expert at this. They claimed that tax cuts got the economy going. Actually the effect of their policies was to lower taxes for the rich and powerful and raise them for working class. State, local, city taxes, fees, tolls, etc... all were raised as result of Reaganomics. Funding for the poor decreased and monies for upper class folks (this was done through tax policy and direct subsidy) and corporations radically skyrocketed giving them the ability to invest where-ever they wanted to in the new Reagan/Thatcher deregulated world. He also represented the massive assault on organized labor that gained steam in the 70's. He and his masters wanted to eliminate the power of labor unions at home and abroad. He saw them as an impediment to unchecked capital accumulation and he did everything in his power, including destroying PATCO, to lessen the power of workers. This development is probably his most long lasting, the fall of the Soviet Union had less to do with him than is claimed.

I had to cringe yesterday when NPR was hailing Ron and Nancy for their "courageous" outspoken views on public health in regard to stem cell research. These are people, because of their bigotry towards gays, stood by while the pandemic of AIDS germinated under their powerful noses. They actually blocked monies for AIDS research and purposefully down played the devastating potential of AIDS. They were in a position to do something, they did nothing because of their bigoted views. In the near future millions will die around the world because of their deliberate negligence.
His legacy is a powerful one. He represents the counter-revolution that we are going through throughout the world. His world was a Hollywood vision of individualism, if you just work hard enough you'll get ahead. From Soweto to Managua millions of people died and will die because in his crony-capitalist world power is highly centralized in private hands and capital trickles up because the state is on the side of the powerful and if you step out of line don't be surprised if El Mano Blanco, a Central American death squad helped by the CIA, puts a cap in your *ss.
In a word, Ronald Reagan: mean.

Christopher Fons lives in Milwaukee and runs the Red and the Black website.
Posted by Rogue Botanist at 14:55 No comments: