Almost two million pounds of oiled sand have been removed from after an oil
spill one month ago.
Credit: Jeff Adams

The spill – named the Texas City Y Spill because the site is near the intersection of three major waterways – comes just as the migratory shorebird season approaches.  A significant amount of oil drifted to Matagorda Island, winter home to the only naturally wild flock of whooping cranes. When the spill occurred, approximately 70 percent of the estimated 304 whooping cranes had not yet begun their migration to Canada and about 40-60 were on Matagorda Island. Matagorda is part of a barrier island chain that extends along most of the Texas shoreline. In addition to wintering whooping cranes.The island has 11 pairs of nesting aplomado falcons, a resident bird that was extirpated from the United States in the 1950s and is being successfully reintroduced.  Kemp’s Ridley sea turtles are currently staging in the Gulf and are expected to begin nesting on area beaches, the most northern extent of their historic range. The barrier islands along the Texas coast are important for many other migratory birds, including piping plover and shorebirds that feed on the sandy beaches and roost in the vegetation of the foredune.

After the 170,000 gallons of oil spilled into the waterways of Texas City it slipped through the control of the U.S. Coast Guard and drifted south.  I was called in to join a contingent of resource advisers to monitor the contracted cleaning crews to insure they didn't destroy more habitat in the process of cleaning up. The oil came ashore then was buried under sand from 1-5 inches.  Rather than only directing crews I joined in the shoveling for 7 days - piling up oiled sand for disposal into dump trucks to either a landfill or cleaning (?).  By the time I left the cleanup had completed its objective but monitoring by other federal employees is ongoing.  I worked from 0600-1930 with only time otherwise to shower, eat and hit the rack.

On my last day a green sea turtle (Chelonia mydas)  was discovered on the edge of a huge swath of sargasso seaweed.  It appeared exhausted but showed vigorous life when picked up.  It was taken to rehab in Port Aransas and then released back in the Gulf. 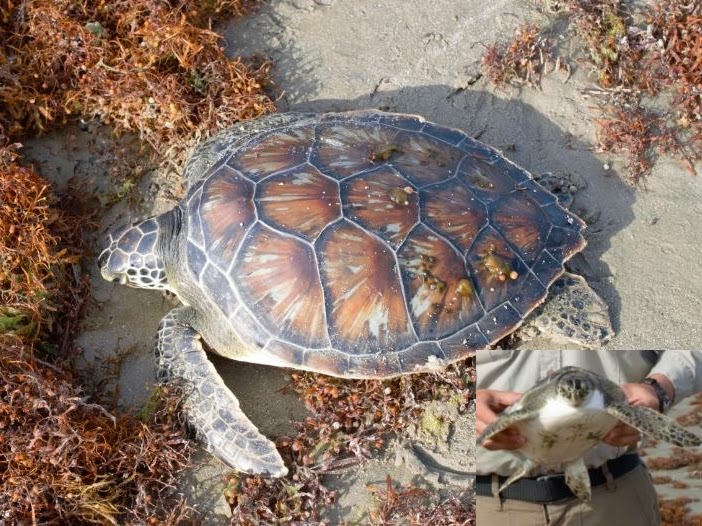 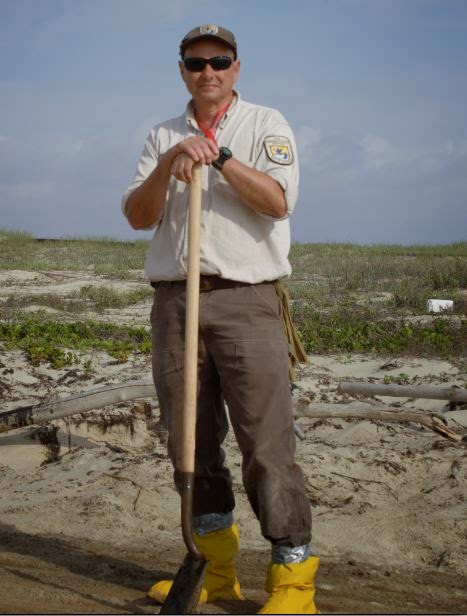