What a Refuge Biologist Does 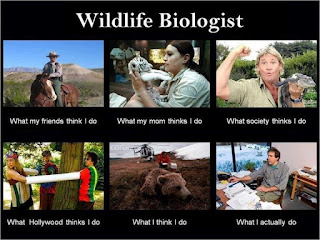 The Case of the Missing Cajones 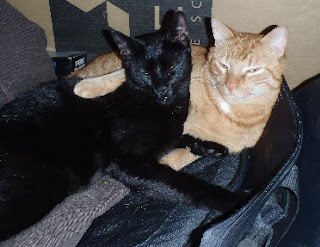 Doobie Jr.  went to the vet to have his cat-manhood sniped.  When I called later for a status I was told he didn't have his teabag to begin with.  Good, I thought, someone did this for me before he went wild on the refuge.  This will save me a couple of hundred bucks.  When I arrived to retrieve him the vet said there appeared to be no signs of a neutering yet he had a penis.  As yet Doobie has not exhibited the signs of a cat on raging hormones although he does give Motorhead grief once in a while.  There's the possibility the testicles are inside him and that would entail cutting him open to dig them out which is like spading and more expensive.  I'm going to wait 2 more months then have a testosterone test preformed to see what's going on.  Figures.
Posted by Rogue Botanist at 19:48 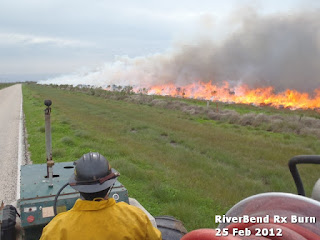 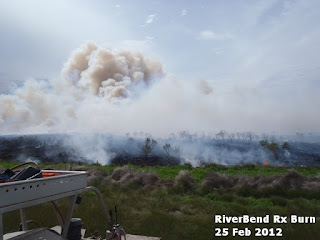 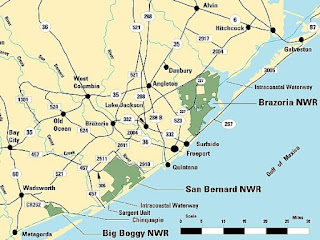 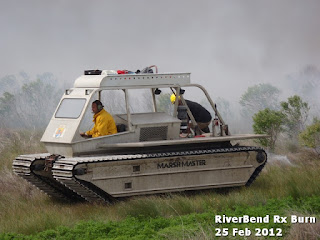 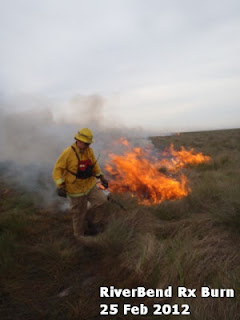 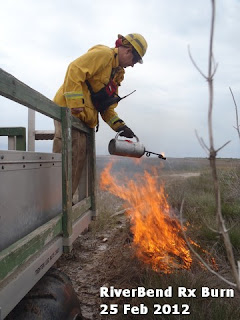 Winds gusting up to 20 mph was the only worry for this routine prescribe burn. It was planned for a unit where north winds would carry the fire to wetlands here it would be extinguished. Recent rains had necessitated the use of specialized vehicles which could traverse over most wet soils without bogging down - The Marsh Buggy and Marsh Master. I was assigned to a marsh buggy and ignited the edge of the prairie as we moved along a fire break. When the winds repeatedly blew out my torch I resorted to walking and the inevitable soggy boots.
Posted by Rogue Botanist at 15:28 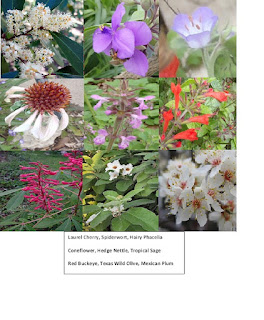 There wasn’t a winter this year; the coldest temperature was 35 degrees. Most of my trees dropped their leaves but the Texas Wild Olive (Cordia boissieri) retained its foliage and is now in the process of replacing it with new leaves. In a typical winter that tree would be leafless. The tropical sage (Salvia coccinea) did not die back, thus flowering with the spiderworts in late January. Other plants are emerging early – turk’s caps and wafer ash but the standards are on time – Red Buckeye (Aesculus pavia), Hairy Phacelia (Phacelia hirsute) and Drummond’s Hedge Nettle (Stachy drummondii). I assume the Coneflower (Echinacea angustifolia) and White Honeysuckle (Lonicera albiflora) bloom much later in the Texas Panhandle where I collected them. New flowering additions are the Mexican Plum (Prunus mexicana) and Laurel Cherry (Prunus caroliniana). Neither have an additional tree to cross pollinate at this time so I doubt fruit will appear. Bedstraw (Gallium aparine) is as persistent as ever but an annual and if I can rake the majority of it I won’t have such a nuisance next year. Same goes for Carolina Geranium (Geranium carolinianum). Coral Bean (Erythrina herbacea), Flame Acathus (Anisacanthus quadrifidus) and Beauty Berry (Callicarpa Americana) are just emerging. My lone pecan (Carya illinoiensis) and Button Bush (Cephalanthus occidentalis) won’t have foliage until late March or later.

I put out a bird feeder this “winter”. There’s a pair of resident Eastern Chickadees that get to it between the mass feedings of English Sparrows. Lately I’ve seen a flicker that is not intimidated by the mobbing of grackles. For a while I would fill the feeder every 3 days but the grackles clean it out in a day. My intent for the coral honeysuckles (Lonicera semprevirens) and Cross Vine (Bignonia capreolata) is have them surround a section of the backyard with dense foliage of unobservable privacy and a multitude of flowering for migrating and resident hummingbirds.