All characters and events in this story may or may not be based on reality.

I’ve been tasked to write a story based on the thinnest of recollections of Christmas therefore, I started my own celebration of Jesus’ birth.  This story is a amalgamate of events which transpired on Christmas 2018.  It is not lost upon me that I, a 58-year old man is participating alone in a tradition made for celebrating with family and friends.  This is not meant to solicit pity.  My family stopped inviting me to Christmas parties only recently after nearly forty years of avoiding the invitation.  They’ll still pray for me to their dying days to keep me from going to hell.

It took some effort to find the mushrooms.  A call made to a person who knew a person who knew a location to collect the fungi from cow pies outside Huntsville, TX.  I thought of this mushroom Christmas party too late to initiate a transaction from the Dark Web.  Too late to wait for funds to be deposited from my bank to the account of a digital currency exchange to an account with a TOR black market exchange where the vendor only accepted Bitcoins for purchase.

Genus Psilocybe, species unknown. These could be any one of a several species in North America although the majority for sale are P. cubensis.  Might as well get into the spirit of the season I told Motorhead, my orange tabby cat.  He stopped licking his phantom testicles for a moment to look at me, the slave he’s tolerated for the last 12 years.  Othello, the deaf 17-year old Australian Shepard was oblivious on his mat.  Doobie, the black ninja assassin cat was not present. The Christmas tree substitute, Funastrum cynanchoides aka Ass Vine, grew entwined around a lattice in a 1-gallon pot on my desk. What is it that makes me inclined to cut the vine’s surface, smelling the putrid, exuding sap to confirm that it indeed smells like ass?


Christmas music! Must have Christmas music! What’s a Christmas without the endless drone of songs designed to keep adults in perpetual childlike subservience?  I gotta admit though, Handel’s Messiah does kick ass.  With songs setting the ambience I placed the mushrooms on a scale, weighing three grams.  Two grams more than my previous limit but fuck it, I wanted to see God or at least a reasonable facsimile.  I can’t speak for Islam or Judaism or any other of the World’s thousand other religions but I can say that even after a lifetime of atheism the Catholic church’s cultist brainwashing still retains a smidgen of hold on me.  Much like after seeing innumerable horror movies you have that inexplicable feeling there’s a monster waiting to disembowel you in the forest darkness no matter how silly the notion.  A final precaution: protecting my surgically replaced knee with a brace.

The taste of psilocybe mushrooms is horrid.  I liken it to eating a wet towel found in the bottom of a washer after two days.  I was prepared though, chopping and mixing the fungi with dairy-free coconut chocolate ice cream chased by a glass of orange juice. The latter a well-known urban myth or perhaps truth for enhancing the effects of the trip.  One more preparation: It’s a Wonderful Life playing on my computer screen.  A life-long favorite of mine, the movie is a microcosm of white Christian male exceptionalism in 1946 where women accepted their lot as baby ovens and people of color are so powerless that not even one was present in the background of Bedford Falls, Massachusetts. Still, it’s a great story of redemption and acceptance where you are so fucking important that if you didn’t exist the people you knew would live a life of loneliness, despair and unfulfilled ambitions.

Depending on dosage and body mass the effects of magic mushrooms can begin anywhere from 30 minutes to 1.5 hours.  I can’t say exactly when my trip started, only that the first clue was Motorhead’s fur pouring off him in a cascading waterfall.  He stared at me, then called out in that disjointed meow of his.  This cat has been on the spectrum ever since he was found after riding in a car’s motor for 20 miles.  Hence the name.

At this point the neocortex was partially shutting down, relinquishing most control to the ancient reptilian region of my brain.  I mimicked Motorhead’s meow, trying to decipher a cognitive language pattern.  There was an urgency to these actions as if I would never get another chance to understand him.  We continued this back and forth meow banter until he jumped from the bed to another room.  I followed, watching his fur flow onto the floor.  He walked towards his cat food on a small table to keep Othello from eating it.  I recognized his repeated meows as a sign he wanted me to see something.  In the past it was always a crippled insect, usually a grasshopper which was the extent of his hunting prowess.  I scanned the floor then focused on the body of a rodent under the table.  It was a rat, headless and eviscerated.   Offal radiated out from the body in haphazard directions. Ah! the ninja assassin cat left me an offering.  I picked up the rat.  Its dried entrails stretched from their adhered anchor point on the floor then snapped free around my hand.  Hand and rat swirled with a trail of visible echoes as I walked outside to thank Doobie. Leaving the door unlocked to do so was a tactical mistake as was evident when I missed my step off the threshold.  The rat flew from my hand into the night as I fell towards concrete. A lifetime of falls instinctively turned my body sideways to allow the upper arm take the brunt of it. Mostly.  Sharp bolts of pain in my bum knee felt rhythmic, a steady beat emanating then abruptly stopping as if I willed it to do so. I laid there for an indeterminate amount of time, raising my hand to touch intermittent rain drops.  Then panic as the drops coalesced into a white putty enveloping the arm towards my head.  I retained my composure, limping inside the house to the bedroom to watch the movie.

I found it fascinating how George Bailey et al moved in concert with Tchaikovsky’s 1812 Overture but even more astounding was the bellowing of my farts during the cannon fire.  Apparently, the songs had shifted from Christmas music to my classical mp3 list and the ice cream’s fake sugars had energized my gut flora, producing one explosive fart after another.  After the music ended, I continued farting and giggling because it was background noise during the darkest moments when George had lost everything.  As George begged the angel to restore his previous life, I spied from my periphery a dark object at eye level from atop a book case.  It was Doobie. We locked in a Clint Eastwoodesque stare down until I was the first to break contact.  I returned my gaze, thanking him for the rat offering however, sensing another opportunity to communicate I asked him - Why?  He yawned a reply.  I repeated my question to no avail.  Then it dawned on me - it’s who he is!  For the rest of this cat’s existence he will follow and refine his genetic raison d’etre. He can’t change, no one can’t change their genetic destiny especially humans.  Is this what you are trying to tell me, Doobie?  That we think we are masters of our domain, raping and pillaging the earth but our existence is a blip in the grand timeline of this planet’s existence and our species will eventually succumb to the billion-year web of life and death?  Again, no reply.

Doobie slunk off the bookcase onto the bed then the floor.  I followed him to the guest room, my eyes adjusting to the peyote grow-light as he jumped onto a bed to curl up cat fashion. Whatever the cat’s intentions they held onto their secrets after I left mushroom dimension. 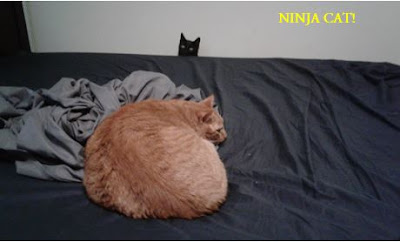 The operation to completely replace my knee took about two hours.  I felt no pain afterward but that was due to the nerve blocking medication.  After day two I was reduced to Vicodin and a walker, unable to lift the leg at all. 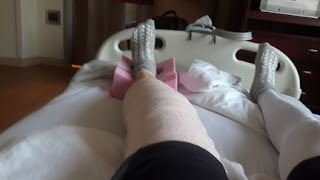 No regrets. It was to the point where nothing was between my knee bones.  They were grinding together into dust.

With Connor, my stepson, gone I was on my own.  I had prepared meals in advance but found I needed more supplies.  My coworkers volunteered to help in whatever capacity and only once did I need help to purchase groceries thanks to David Sigafoose.  After that day I managed to drive to the store, work and rehab but it was still touch and go.  I can get around in the open with a cane but need a walker around the house.

The staples are out. The doctor said I was making excellent progress.  The risk of infection is almost nil by now. 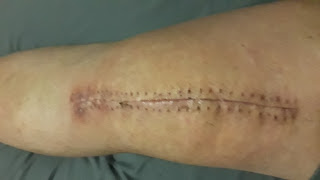 Sleep is fitful.  The rehab center puts me through basic leg lifting and stretches. After a week of therapy I am able to lift my leg.

The swelling is reduced to the knee region, making flexibility problematic.  To remedy this I hit the stationary bike at work, bending the knee as much as possible.  I am finished with rehab after realizing my day to day routine at work far exceeds what I get at the rehab facility.  It figures, people go in there after a day of senescence but I'm on my feet for hours as well as carrying, stooping and putting my knee in positions that ultimately make it stronger.  I'd say I'm at 60% power level which effectively leaves me drained by 1700.  For a time I needed 10 hours sleep to recoup. During the night I awake to ice the knee down then go back to sleep.  The process is repeated after work.  Meds are reduced to 95% and taken mostly after hours of pushing myself physically.  The background pain which has drained me physically and mentally is dramatically reduced from previous weeks.  There are times I don't notice it and times when I move instinctively without worrying where to place my leg.  Every day is incrementally better albeit still frustrating.  I remain positive I'll pass the fire physical fitness test in April but if now I'll keep trying.  I need to remember that a lot of physically disable folks never get better. 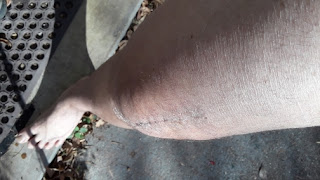